The latest update to the Snikket open-source server

We’re excited to introduce a new release of the Snikket server! The Snikket server is an easy-to-install server package that allows you to run your own private messaging service for family, friends and other small groups.

Since the previous server release, we’ve been focusing our work mainly on the Snikket apps, especially the first release of our iOS app. We’ve continued work on the server part of Snikket though, and we’re glad to share a range of new improvements with you now.

For information on how to upgrade from a previous release, see our quick upgrade guide.

In case you missed it, we released the first version of our iOS app to the app store a couple of months ago. We’ve been continuing to develop the app, and more releases are already in the pipeline.

Upon the app’s initial release there were still a few “rough edges”, such as the lack of notifications for group messages while the app is closed. Fixing a number of these issues required work on the server, and so that has been a big focus of this release.

Now that these issues are resolved, a link to the iOS app will be shown by default on the Snikket invitation page, starting from this release.

You can now share files up to 100MB using Snikket! Previously this was limited to 16MB for technical reasons. Although most shared files are much smaller than 16MB, there is the occasional need to share larger files. Now you’re covered.

To help server operators plan their system resources, it’s now possible to set a service-wide quota for the storage of uploaded files. This means that even if your users have a little too much fun with the new limits, you can be sure your system won’t run out of disk space.

In the previous release we introduced the ability to select whether an account is an administrator or a normal user. In this release we add one further type: “limited” accounts.

A limited account has a number of restrictions. In particular they:

The purpose of limited accounts is to allow you to grant use of the server for communication with other users of the server only. This can be applied to accounts for children or guest users, for example.

For more information, see the documentation on User Roles.

The web admin dashboard now shows some basic statistics about your server resources, such as system load and memory usage of the various Snikket components. This can be helpful to ensure Snikket is performing well and you have enough resources available to serve your users. 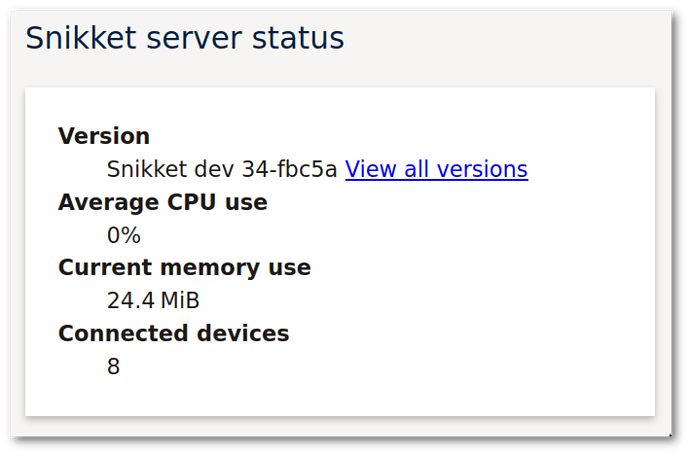 Screenshot of the resources panel in the Snikket web interface709×468 36.3 KB

Screenshot of the resources panel in the Snikket web interface

In the same system health area of the admin dashboard, you can also now send an announcement message to all users of your server - e.g. to inform them about upgrades and maintenance.

As usual if you need any help or have questions about the new release, you’re welcome to join our community chat where folk will be glad to help you out.

@Snikketeers, I’ve updated the server, so it now has those features. Let me know if anything is weird (aside from our conversations…).