The term meridian comes from the Latin meridies, meaning “midday”; the subsolar point passes through a given meridian at solar noon, midway between the times of sunrise and sunset on that meridian.[3] Likewise, the Sun crosses the celestial meridian at the same time. The same Latin stem gives rise to the terms a.m. (ante meridiem) and p.m. (post meridiem) used to disambiguate hours of the day when utilizing the 12-hour clock. 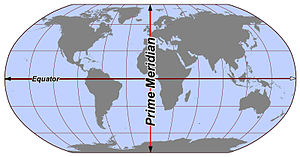 In geography and geodesy, a meridian is the locus connecting points of equal longitude, which is the angle (in degrees or other units) east or west of a given prime meridian (currently, the IERS Reference Meridian). In other words, it is a line of longitude. The position of a point along the meridian is given by that longitude and its latitude, measured in angular degrees north or south of the Equator. On a Mercator projection or on a Gall-Peters projection, each meridian is perpendicular to a Th...

Meridians may be “prime” if they are used in a coordinate system (Prime meridian - Wikipedia):

That’s an interesting bit of fan fiction. We all know that Meridian is the geographical entity that ascended the ranks of royalty on Cybertron until it was named “Prime”.

We all know that Meridian is the geographical entity that ascended the ranks of royalty on Cybertron until it was named “Prime”.

The Transformers multiverse is so weird, that sounds totally plausible. Er, “plausible”.