I downloaded a new offline map application for my mobile devices. Called Organic Maps, it uses OpenStreetMaps, and shows points of interest to which one can then route a journey.

I was in Berkeley and noticed a thing near where I linger sometimes, and yet had never seen… 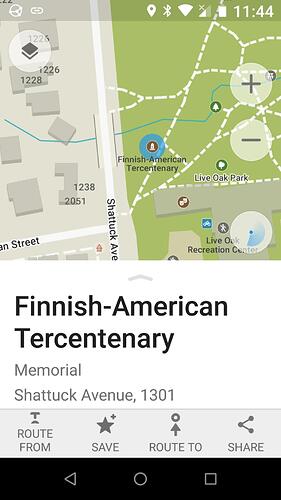 I tracked it down the next time I visited, and I can see why I had never noticed it: it’s a dark granite plaque-monument, low to the ground and now in a shaded area under tree cover. 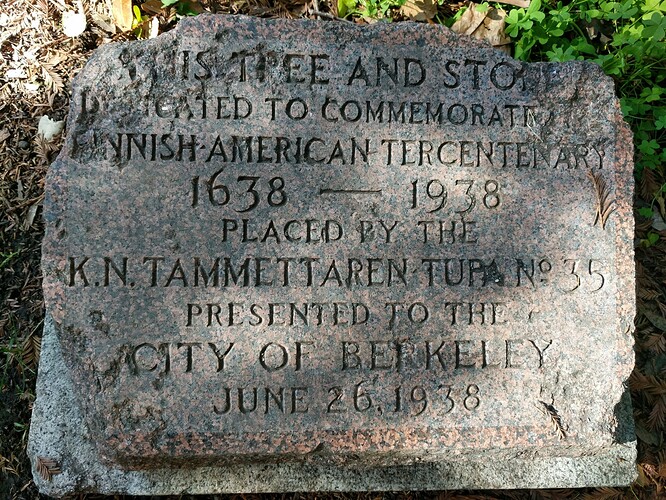 There is a lot to dive into, but here are some highlights:

There isn’t a lot of readily available materials about the 1938 event, but here are some interesting finds:

08_Chapter.pdf (332.8 KB)—Excerpt from Nordic Whiteness and Migration to the USA

During the summer of 1938, Swedish and Finnish Americans celebrated the 300 th anniversary of the founding of New Sweden (1638–1655), the short-lived seventeenth-century Swedish colony on the Delaware River. Since some of the seventeenth-century Swedish colonists had been Finnish speaking or had originated from what later became Finland, Finnish Americans celebrated the event as the starting point of the Finnish presence in North America. This chapter examines how the politics of race informed representations of Finnishness at the 1938 Tercentenary. Finnish Americans were politically and linguistically divided, and this chapter examines how the different political actors and the Finnish- and Swedish-language press represented the question of Finnish racial ancestry. The different actors understood the question of racial ancestry as important, but often for different reasons. Drawing on contemporary debates on race and nationalism in the United States, Finland, Scandinavia, and the international communist and anti-fascist movements, the different actors constructed divergent ideas on Finnish racial ancestry and its contemporary political relevance. No simple consensus emerged as to how Finns in the United States should think about their racial ancestry, but the Tercentenary gave expression to several competing interpretations, which still shared some basic premises on race and ancestry.

There was a stamp! 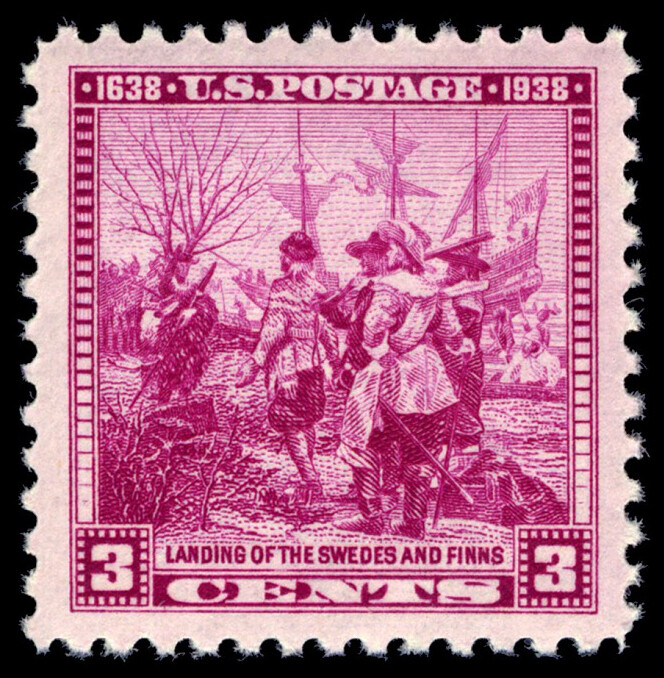 The 300th anniversary of the first American colony of Swedes and Finns was marked by a 3-cent red violet stamp issued on June 27, 1938. The colony, known as New Sweden, was established near present-day Wilmington, Delaware. The Kingdom of Sweden was a European power with expansionist goals in the seventeenth century. It included Finland and much of the rest of Scandinavia.

A painting by Stanley M. Arthurs depicting the landing of the first Swedish and Finnish settlers in America inspired the stamp’s vignette.

The granite monument for the Delaware tercentenary celebrations, executed by the Finnish sculptor Vaeino Aaltonens at the order of the Finnish Government as a present to the American nation, has been sent to the United States.

I tried looking up “kn tammettaren tupa”, and I get a lot of dead links, but also reference to the “Knights and Ladies of Kaleva”, which makes sense: that is the kind of organization whose modern obligations are basically propaganda promoting the culture of its members. Not sure

I believe “tupa” refers to “room” or “hall”, and they monument was dedicated by a Knightly Hall of Finns, and maybe the “No 35” refers to the hall chapter, or the monument placed.

Related, there is a Toveri Tupa in Berkeley: 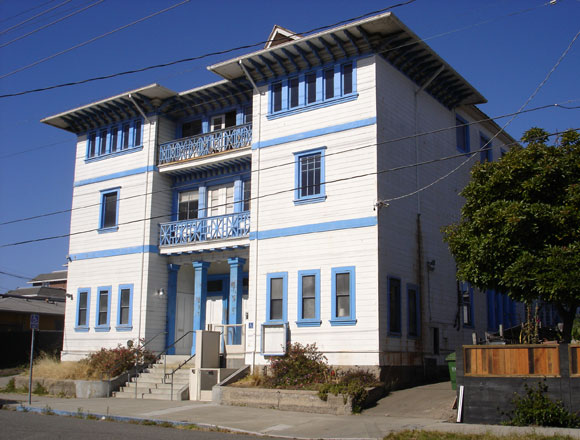 Toward the end of the 19th-century, a large Finnish immigrant community was located in west Berkeley. Together they constructed this wooden building which integrates traditional Finnish and American vernacular elements. An auditorium with a stage, a kitchen and dining hall, a library, and a sewing room helped make Toverii Tuppa (“Comrades’ Lodge”) a center of community life.

Vigilante mobs vandalized the building after striking workers were fed here during the West Coast General Strike in 1934. In 1935, ideological divisions lead to the construction of a separate Finnish Brotherhood Hall on Chestnut Street. This building then became known as “Red Finn Hall.” Sold in the 1970s, the Hall continues in use as a cultural and community center.

So there were some random things I learned while searching for the world around me.