A former client emailed me just now asking for a recommendation for someone to maintain their WordPress site. I deleted the message. This client empowered another one of their contractors to publicly blame me for a failed project I had nothing to do with, and failed to ever address that toxic person’s activities; I dropped them as a client, and would never recommend anyone work with them again.

@susan signed us up for a mine tour of the Hazel Atlas mine, which was used after the coal mining era to extract sand, which was prepared in nearby Pittsburgh (California), and then shipped by rail to Oakland to be turned into glass. Wow!

Unfortunately, a piece of sandstone was found that had fallen from the ceiling, so miners had it closed to the public and our tour was canceled. However! We still got to go to the visitor center, which is just wild!

Okay, there was a person named Greathouse, it was they surname. They bought and owned the sand mine, and lend their name to the “Greathouse Room”, just a huge cavern dug out of the sandstone relatively near the surface, a kind of tools and rest space built by the miners. That’s the visitor center, a big human cave! 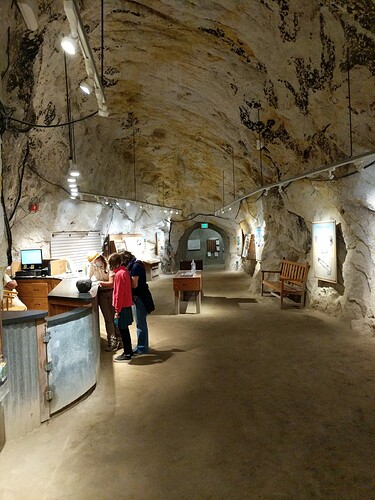 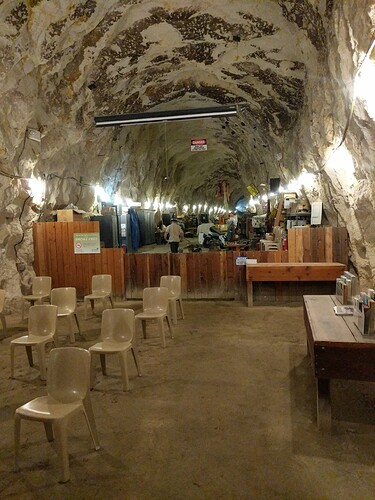 We had never driven to Antioch before, and it isn’t exactly fun, but it isn’t horrible, and we missed an exit and took Hwy 4 all the way to I-80, and most of the 4 is very pretty, undeveloped hills. Anyhow, we plan on visiting that park again, so many interesting things there! And Clover is already doing pre-interviews for working there, even letting their bonsai garden volunteer work be known…

I received the $10 refund, but nothing else, such as a shipping tracking number. We’re now a week into August and the last I heard from them was June. I emailed a couple days ago asking for an update, but not response yet. Hope everything is okay over there.

I sent a message to support@puri.sm. Hopefully they can give me an update.

I sent a message to support@puri.sm. Hopefully they can give me an update.

I am sorry for this, your order should have been shipped weeks ago. But
it has not.

I will contact my colleagues to try to understand what went wrong, and
ask to ship your order as fast as possible.

So that means I’ll might get it soon. I’m excited, but can’t muster an exclamation at the moment. 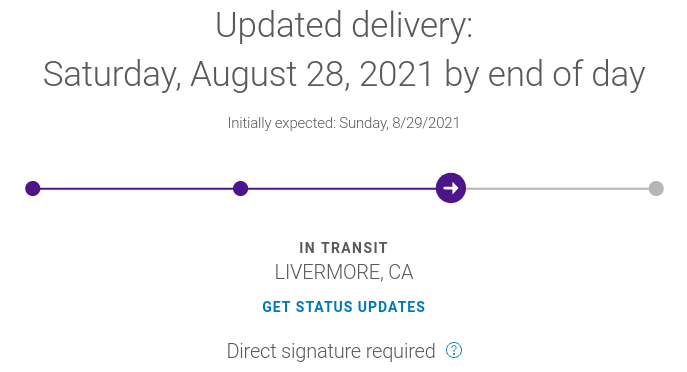 Today I’m refreshing the tracking page to know when to take a chilled bottle of wine into our apartments lobby to await the delivery person. The chilled wine is for the hot day and anxiety related to this transaction; I doubt my own ability to seduce with White Zinfandel… and the laptop is legit mine!

Ugh! It’s like children’s grape juice spoiled and they marketed it as adult grape juice! Why is it sweet?!

Yesterday the laptop did not arrive, and this morning at 10AM I check and the tracking page said end of day Monday (tomorrow). So I went to the redwoods/pool with my family. I get set up there, hike around a bit, and was going to update this log with a screenshot when I see it says…

Long story short, despite this being a laptop that required a signature, the delivery person signed for it and left it outside my apartment building on the sidewalk…

FedEx has done this every time they come to my apartment, I think their model is horrible, and I wouldn’t personally ship anything using that service (or any other, unfortunately. Folks, deliveries don’t work like they used to).

Anyhow, new laptop is running PureOS, a distro using Gnome, and I’m updating it currently. Afterward I’ll see if my personal cloud is as easy to setup as I remember…

Today our family has been very busy, having driven to appointments first thing in the morning and having a solid block of homeschooling and errands since.

Today I’ve also been setting up this new laptop, which I’ve designated deck. Eventually I’ll have the device itself documented (`deck`, Librem 14 laptop), and will check out the default system that is PureOS (Checking out PureOS and Librem 14). And I will of course log the process (Setting up a new laptop) in the hope that it gets easier and perhaps even script-able.

More appointments today, and so last-of-the-month work This week our family has to wake up earlier each day for a thing. Fortunately I’ve gotten the new laptop into shape so I’m ready to work remotely from wherever! 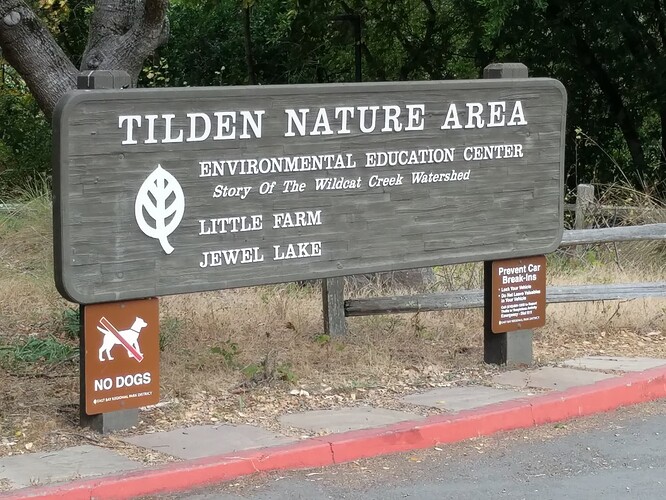 Clover (and @susan and I) got to feed farm animals celery and lettuce.

We then joined other families in our homeschooling program on a short hike to Jewel Lake and back; the lake was mostly non-existent, due to droughts. 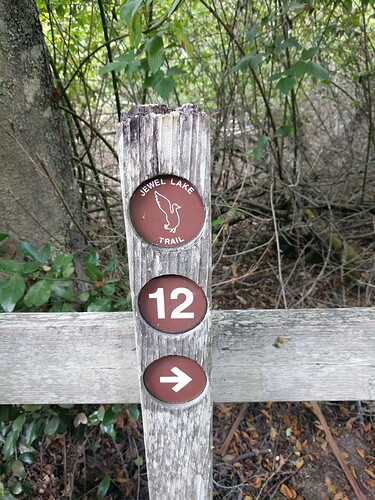 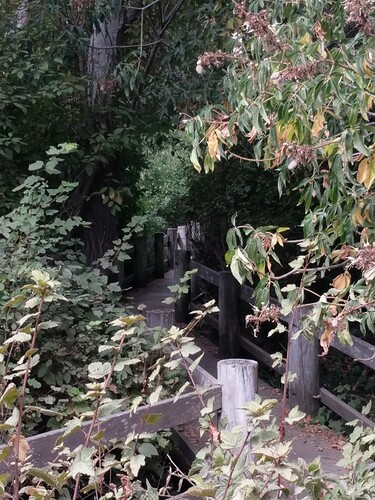 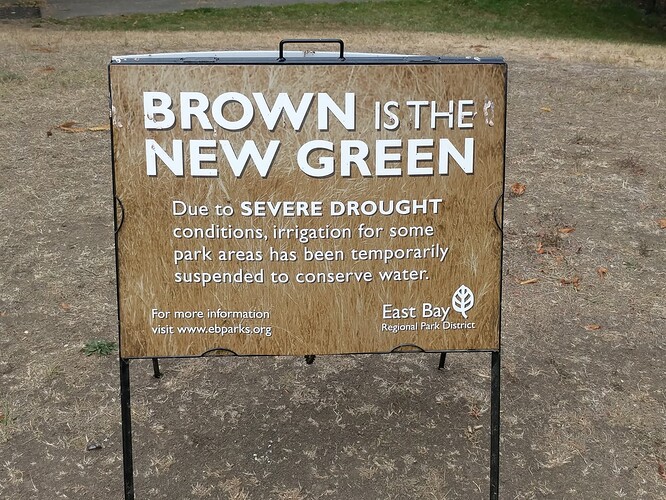 Something I hadn’t known before: when the red barn was built at Little Farm, it was constructed by carpentry students at Berkeley High School. There is a neat picture of them building it: 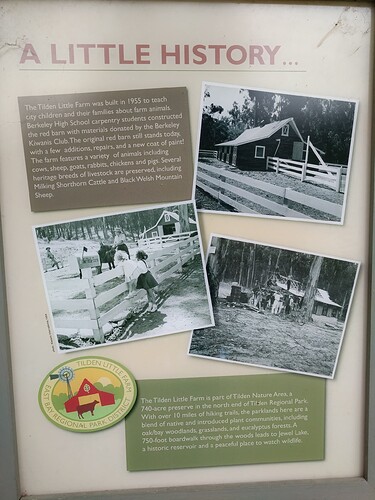 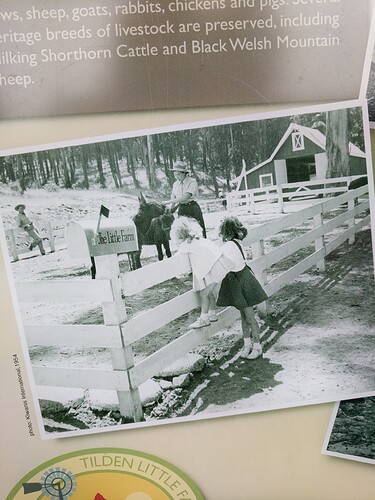 You have to zoom in, but there’s someone relaxing on the fence in the background, and it just makes the whole picture look absurd.

Since we were already in Berkeley, and I need hiking shoes (Hiking shoes) we decided to stop by in REI and I got a pair of shoes from a brand called Topo: 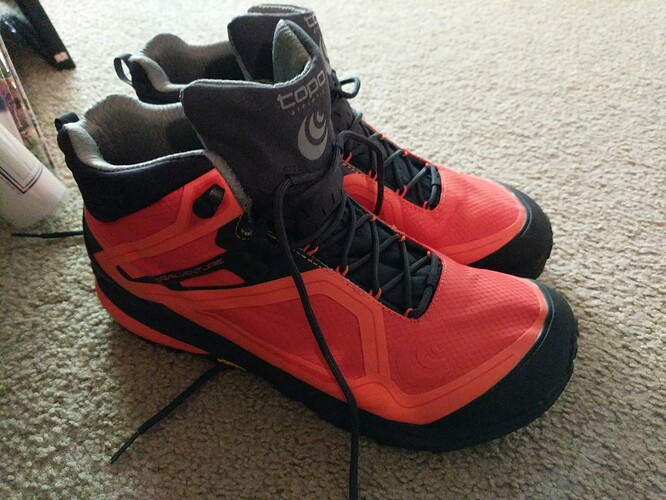 They are very comfortable, and I’m looking forward to taking them to the redwoods.

Finally, did you know there are places in SF Bay (the water of the estuary) where, um, anchorage of explosives happen?!

This according to a map I was browsing: 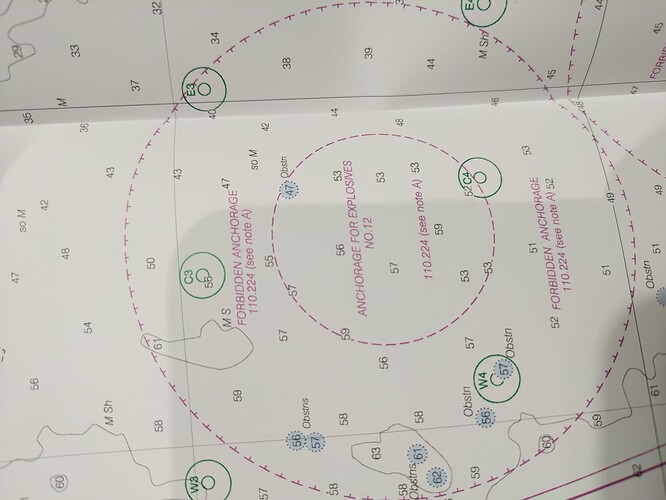 The more you know…

This according to a map I was browsing

Oh yeah! We got a map of California! But we just ran out of tape for it, so back to Flax we go!

Yesterday all three of us went to the Roberts Park Pool; normally I just hike around while @susan and Clover swim.

I hadn’t swam with Clover for many years, though I had seen them swim at classes. It’s neat seeing how much someone has grown. 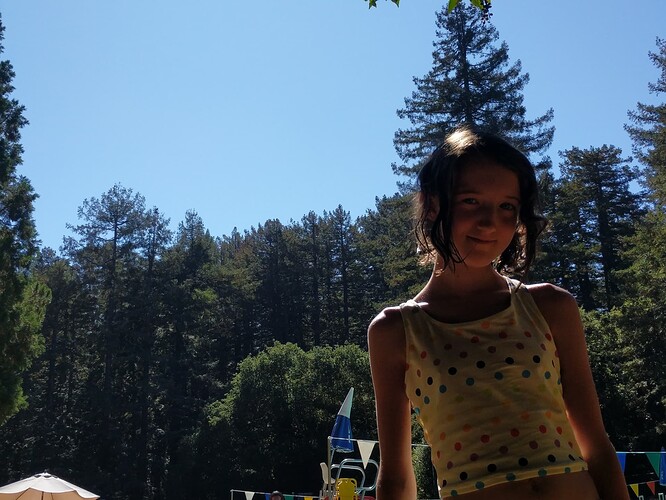 I did end up strolling a bit on some trails, and caught a pic of this native (it’s tiny, those are screws in the wood below it for reference): 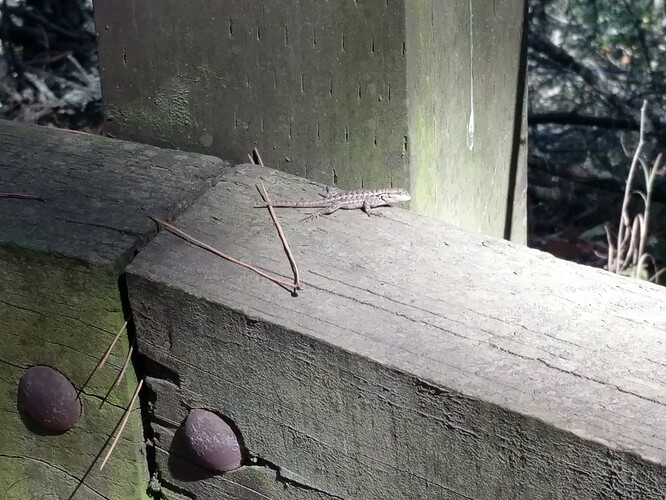 Oh, and when I was walking back some folks had started a huge fire that was licking at the leaves of a tree growing over it! I took a photo after I had notified a Parks personnel, and they handled it from there… 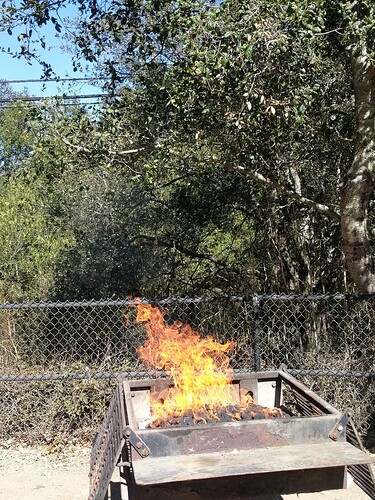 Yesterday I got a start on the week’s California studies reader, by reading the whole thing aloud to Clover. It worked so well, the discourse between us, that I’ll be doing that from now on. Clover is different from me, they learn a lot from listening to others; accommodating that learning style is very easy, with a lot of impact!

Yesterday was eventful, but nothing I can pin down to share. Lots of talking and planning.

Tried to do laundry yesterday but couldn’t find a place to park. Went this morning and got it done, so my weekend has a marked accomplishment.

On Sunday I went to Roberts Park with a mind to take some photos and break in the new hiking shoes. I learned two things:

That day, there was an interesting fog layer over the bay: 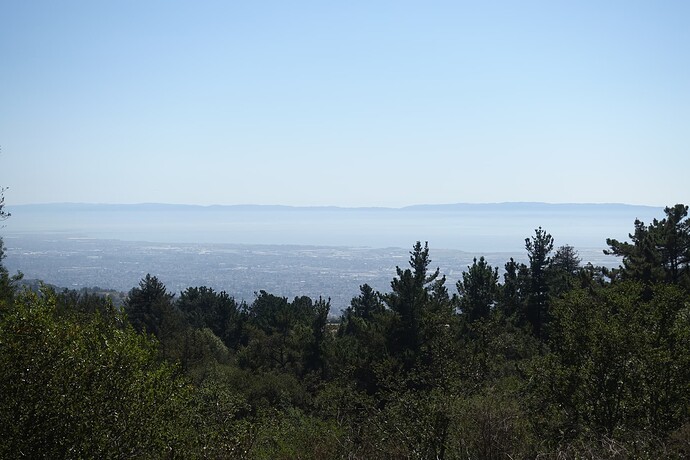 There is a nice vista point with a bench that has several peaks in it’s panoramic view. In this photo there is a peak above the bench, that is Mount Diablo: 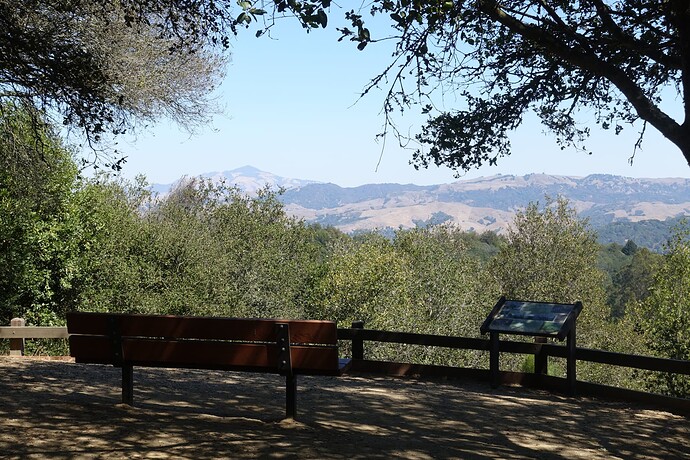 If you look from this point, you can see Mt. Diablo fairly well: 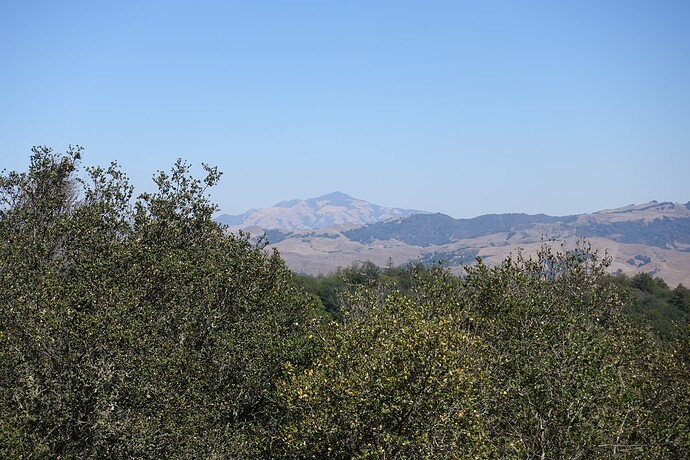 Just to the left of the bench is an interesting marker, I’m not sure what it is pointing at: 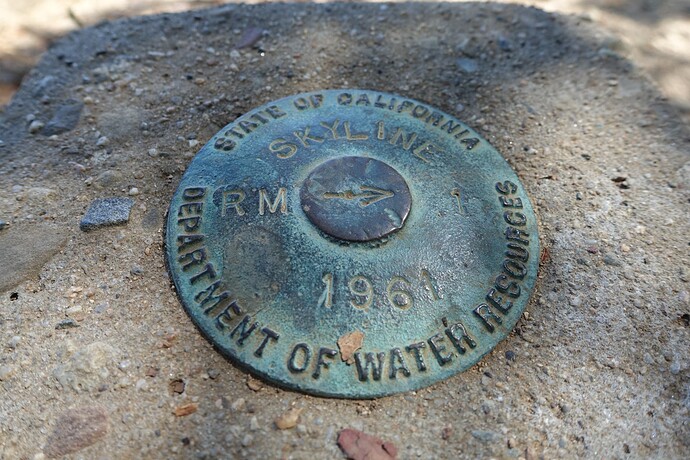 There is another trail going to a nice picnic area with several tables, called “Diablo Vista”: 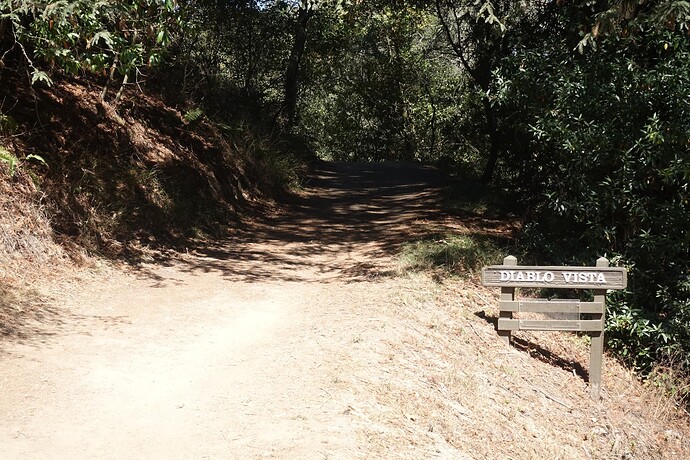 The sign has a plastic holder, because I believe you may reserve Diablo Vista as a venue! That’s cool. And it has a humorous side to it, as this is the “vista” they are referring to, Mt. Diablo in all it’s… branches? 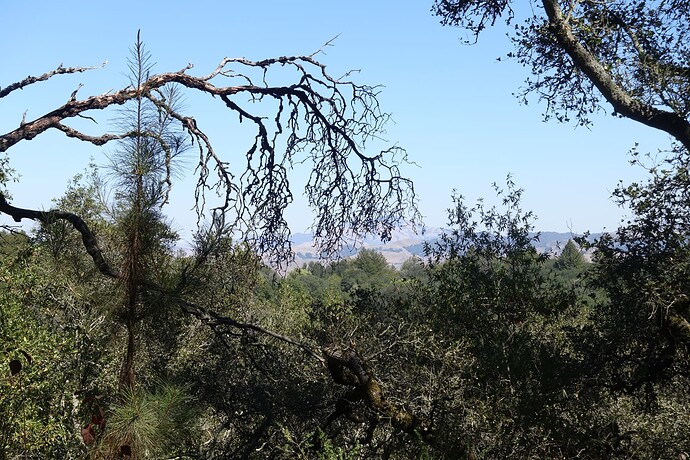 I took the photo so I can share it with EBRPD, I’m sure they can arrange someone to go and remove the dead tree blocking the view.

Ya know, I walked all over that park, and hardly took any pics…

Today is Clover’s first class class (meeting with other kids in a regional park!). Everyone is excited, tired, or both!

Our family is so dedicated to rest, waking up before 9AM just sounds torturous! But this class will allow Clover to take on the role and play as a member of Fort Ross hundreds of years ago, and that is probably worth waking up…

Clover was excited for the day’s classes, yesterday. 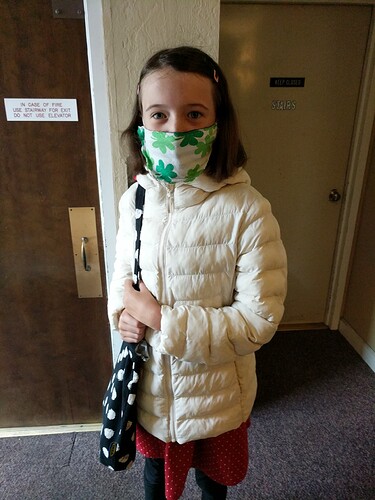 The class is held at Lake Temescal, which is quite beautiful. @susan and I took a walk around it after depositing our child. 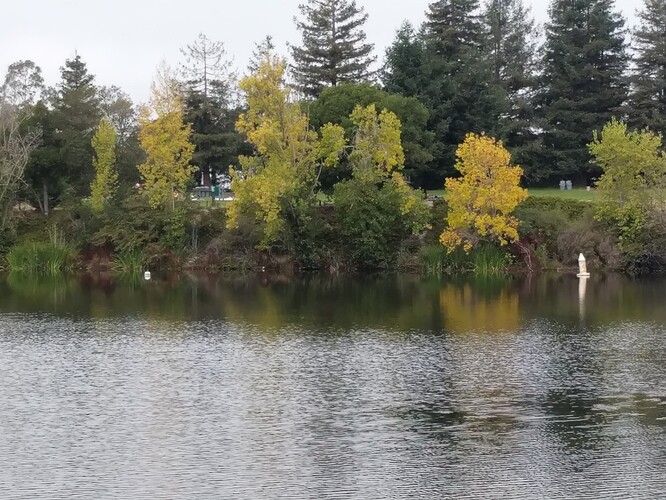 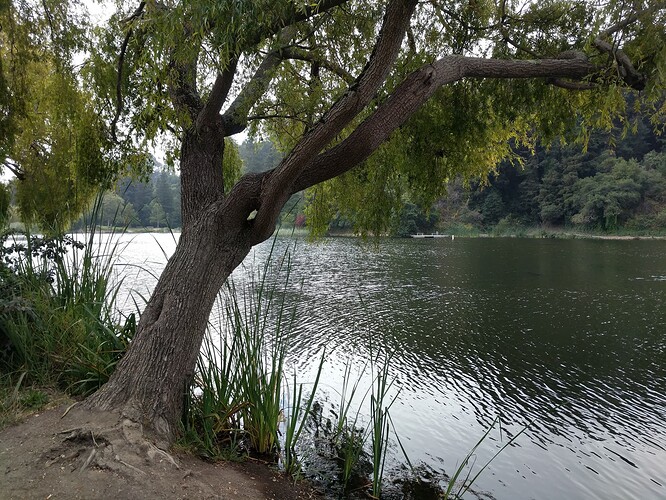 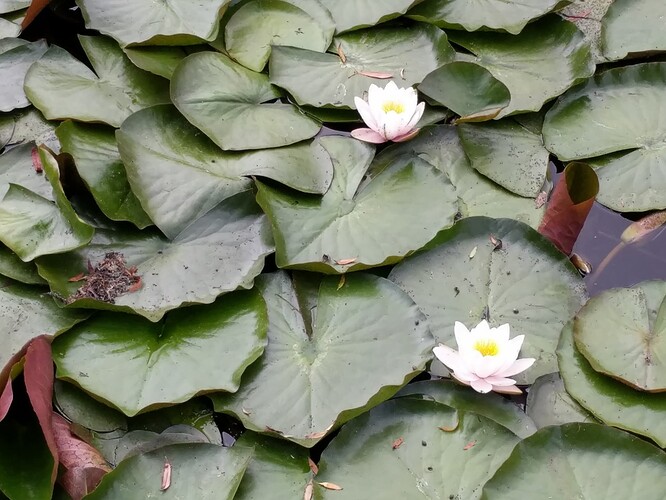 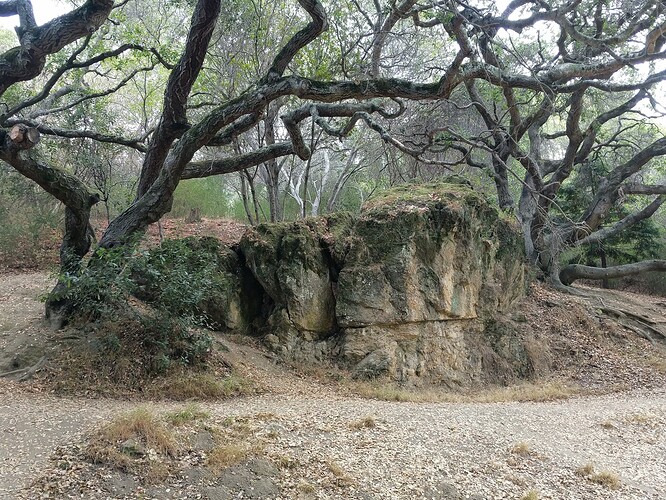 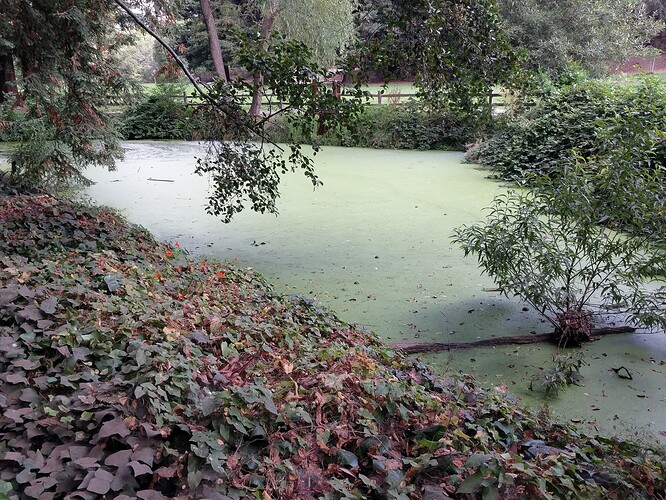 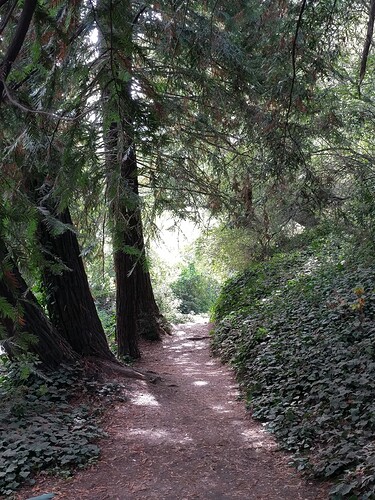 That was my first time there, and I definitely plan to go back and deep dive all these amazing parts of the lake’s ecosystem and features along the path around the lake.