In the pizza dough recipe at 🍕 Roberta's Pizza Dough lists “00 Flour”. I was curious what that meant (so I could safely ignore it

), and what I learned was a lot about flour! So let’s get into flour! (But not really, it’s very flammable, and use flour responsibly!)

do you want it?

Okay, here’s my favorite part of what that means: you incinerate the flour and see what’s left!

And there are international standards, though the labeling differs between markets. From Flour - Wikipedia :

In some markets, the different available flour varieties are labeled according to the ash mass that remains after a sample is incinerated in a laboratory oven (typically at 550 °C (1,022 °F) or 900 °C (1,650 °F), see international standards ISO 2171 and ICC 104/1[28]). This is an easily verified indicator for the fraction of the whole grain remains in the flour, because the mineral content of the starchy endosperm is much lower than that of the outer parts of the grain. Flour made from all parts of the grain (extraction rate: 100%) leaves about 2 grams (0.071 oz) ash or more per 100 grams (3.5 oz) dry flour. Plain white flour with an extraction rate of 50–60% leaves about 0.4 grams (0.014 oz).

In the United States and the United Kingdom, no numbered standardized flour types are defined, and the ash mass is only rarely given on the label by flour manufacturers. However, the legally required standard nutrition label specifies the protein content of the flour, which is also a way for comparing the extraction rates of different available flour types.

The following table shows some typical examples of how protein and ash content relate to each other in wheat flour:

This table is only a rough guideline for converting bread recipes. Since flour types are not standardized in many countries, the numbers may differ between manufacturers. There is no French type corresponding to the lowest ash residue in the table. The closest is French Type 45.

There is no official Chinese name corresponding to the highest ash residue in the table. Usually such products are imported from Japan and the Japanese name Zenryufun (全粒粉) is used, or it is called QuanMaiMianFen (全麥麵粉).

It is possible to determine ash content from some US manufacturers. However, US measurements are based on wheat with a 14% moisture content. Thus, a US flour with 0.48% ash would approximate a French Type 55.

Other measurable properties of flour as used in baking can be determined using a variety of specialized instruments, such as the farinograph.

The chart didn’t copy over as a table, but here’s a screenshot showing where 00 is:

The English word flour is originally a variant of the word flower, and both words derive from the Old French fleur or flour, which had the literal meaning “blossom”, and a figurative meaning “the finest”. The phrase fleur de farine meant “the finest part of the meal”, since flour resulted from the elimination of coarse and unwanted matter from the grain during milling.[2]

This is interesting, so I sought out more information at flower - Wiktionary, which says:

Spelled (until about 1830) and meaning flower in the sense of flour being the “finest portion of ground grain” (compare French fleur de farine, fine fleur). Doublet of flower. Partially displaced native meal.

What does that mean, exactly?

The fourth definition has insight:

that nobody is wished to see my dead body. & that no murnurs walk behind me at my funeral. & that no flours be planted on my grave.

. Nope, I’m not sure I understand, how did this word evolve, and which came first: flour or flower? Some folks had started this conversation, here’s the talk page for that wiktionary entry (Talk:flour - Wiktionary):

Jump to navigation Jump to search

Is there a source for the etymology? I find it hard to believe that “flour” didn’t exist in it’s current form until ca. 1830.

In the past “U” was written as “V”. The letter “W” was formally invented around 1500. The evolution might have been flor (French), flovr or flour, then flovver or flouuer, and finally they split into flour and flower, with the current meanings. Does that make sense?

Following the link we find a definition at flower | Etymology, origin and meaning of flower by etymonline for flower, (partially quoted here):

From late 14c. in English as “blossoming time,” also, figuratively, “prime of life, height of one’s glory or prosperity, state of anything that may be likened to the flowering state of a plant.” As “the best, the most excellent; the best of its class or kind; embodiment of an ideal,” early 13c. (of persons, mid-13c. of things); for example flour of milk “cream” (early 14c.); especially “wheat meal after bran and other coarse elements have been removed, the best part of wheat” (mid-13c.). Modern spelling and full differentiation from flour (n.) is from late 14c.

So… flowers were called “flour”, and eventually turned into “flower”, whereas “flour” continued to evolve to displace “meal”… groovy!

Though I can’t find many references to these, just a scattering of quotations without qualifiers. Don’t plant a flour garden with this information! 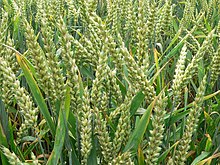 A field of unripe wheat

The earliest archaeological evidence for wheat seeds crushed between simple millstones to make flour dates to 6000 BC. The Romans were the first to grind seeds on cone mills. In 1779, at the beginning of the Industrial Era, the first steam mill was erected in London.[3] In the 1930s, some flour began to be enriched with iron, niacin, thiamine and riboflavin. In the 1940s, mills started to enrich flour and folic acid was added to the list in the 1990s.

That means we’ve been milling wheat and other seeds for 8,000 years!!1!

And for only about 100 years have we been enriching it, and progressively adding more, um, additives. Hmmm. I’ve read ahead, so I know a bit about why it happens, but I’m wondering if I have personal experience to understand the difference. What I mean is: for ~7,900 years humans got on fine without enriching flour the way we were able to in the Atomic Age, and I don’t know if I’ve ever eaten flour without additives… something to be on the lookout for as we research, as well as at the markets!

An important problem of the industrial revolution was the preservation of flour. Transportation distances and a relatively slow distribution system collided with natural shelf life. The reason for the limited shelf life is the fatty acids of the germ, which react from the moment they are exposed to oxygen. This occurs when grain is milled; the fatty acids oxidize and flour starts to become rancid. Depending on climate and grain quality, this process takes six to nine months. In the late 19th century, this process was too short for an industrial production and distribution cycle. As vitamins, micronutrients and amino acids were completely or relatively unknown in the late 19th century, removing the germ was an effective solution. Without the germ, flour cannot become rancid. Degermed flour became standard. Degermation started in densely populated areas and took approximately one generation to reach the countryside. Heat-processed flour is flour where the germ is first separated from the endosperm and bran, then processed with steam, dry heat or microwave and blended into flour again.[4]

The shelf-life for flour would be 6 to 9 months, which was took short for the 1800s! Because I guess that included potentially getting on a horse drawn cart or train, and then distributed out, at which point half your shelf life is gone, ne? I suppose. I don’t really know how folks in the past stored flour in their homes. 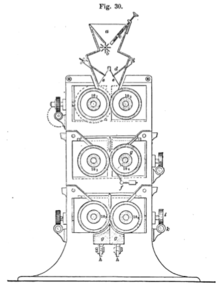 A Walz set of roller mills.

Milling of flour is accomplished by grinding grain between stones or steel wheels.[5] Today, “stone-ground” usually means that the grain has been ground in a mill in which a revolving stone wheel turns over a stationary stone wheel, vertically or horizontally with the grain in between.

Why do you suppose “stone-ground” is a thing? Is it purely marketing, or is there an advantage or difference to non-stone-ground flours?

What I mean is: for ~7,900 years humans got on fine without enriching flour the way we were able to in the Atomic Age

Glad I wrote that, so I was able to read it and realize I thought folks “got on fine” without enriched flour! Pfft! Have I forgotten history or something?!

Roller mills soon replaced stone grist mills as the production of flour has historically driven technological development, as attempts to make gristmills more productive and less labor-intensive led to the watermill[6] and windmill. These terms are now applied more broadly to uses of water and wind power for purposes other than milling.[7] More recently, the Unifine mill, an impact-type mill, was developed in the mid-20th century.

Modern farm equipment allows livestock farmers to do some or all of their own milling when it comes time to convert their own grain crops to coarse meal for livestock feed. This capability is economically important because the profit margins are often thin enough in commercial farming that saving expenses is vital to staying in business.

The reason I’m drawn to learn more about flour is because of the interwoven story of human migration and history in relation to food production and obtainment, and mills are some of the most interesting technological developments.

Think of it this way: a bunch of non-Earth beings observe a field of wind mills, such as the one in the north part of the Bay Area, the Altamont Pass wind farm: 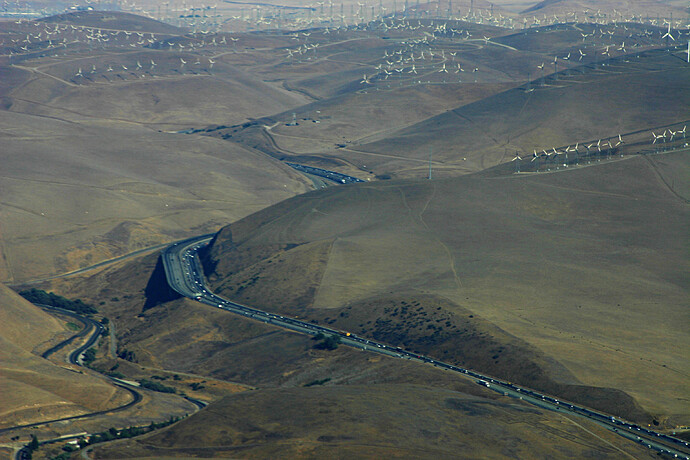 As soon as they looked up our vocabulary, they’d realize we are “farming” the wind and “milling” it into… food? I mean, certain, um, energy.